Anyone for Thirds? – The 3-way split that divides photographers in 2 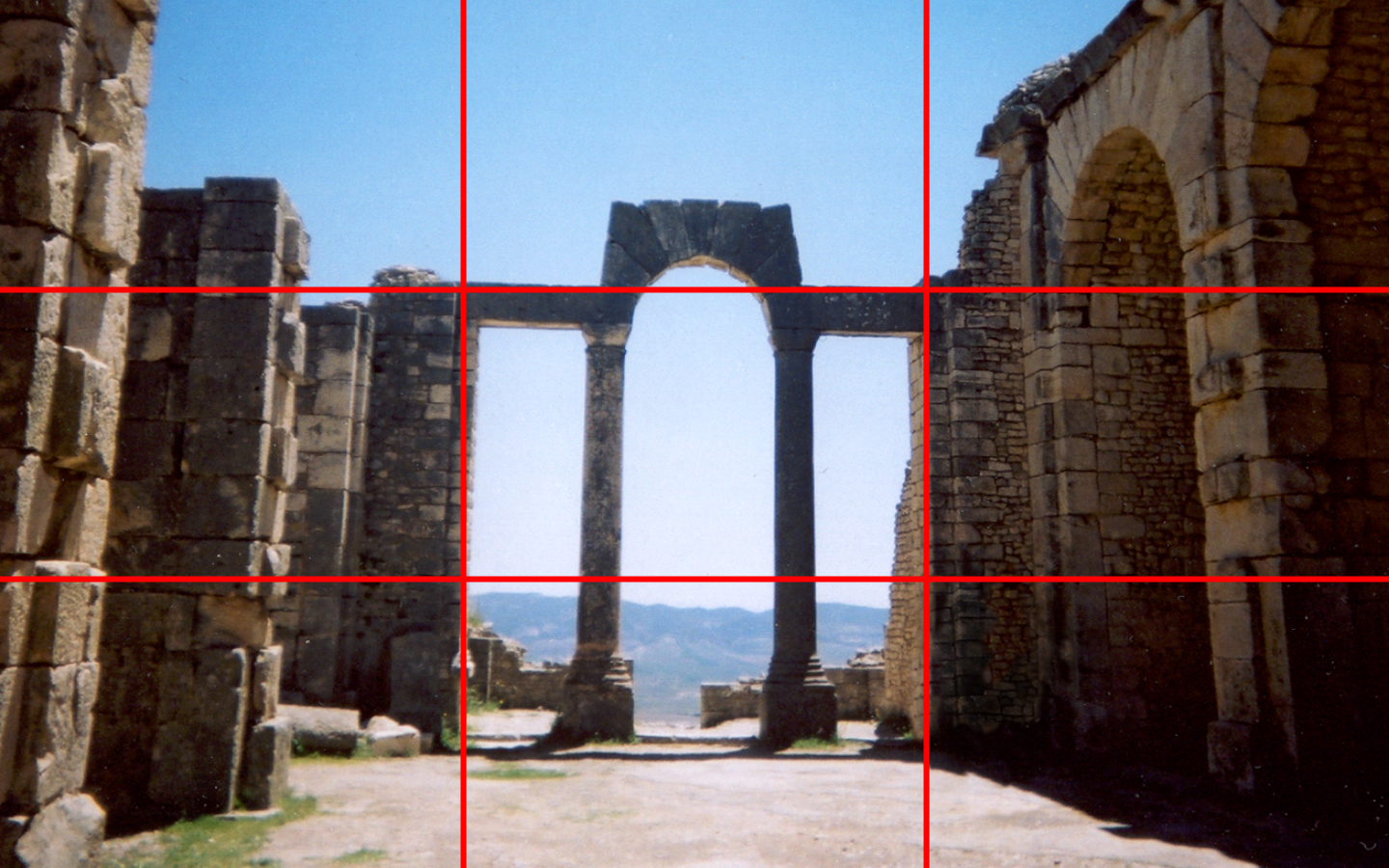 The basic premise that is put forward today as the rules of thirds is that images with the subject centred in the frame are far too conventional and mundane and that placing the subject a third of the way across the canvas produces a far more dynamic image. This side placement of the subject also opens up the background as a more lucid environment to the viewer giving the subject a clear context to interact with. 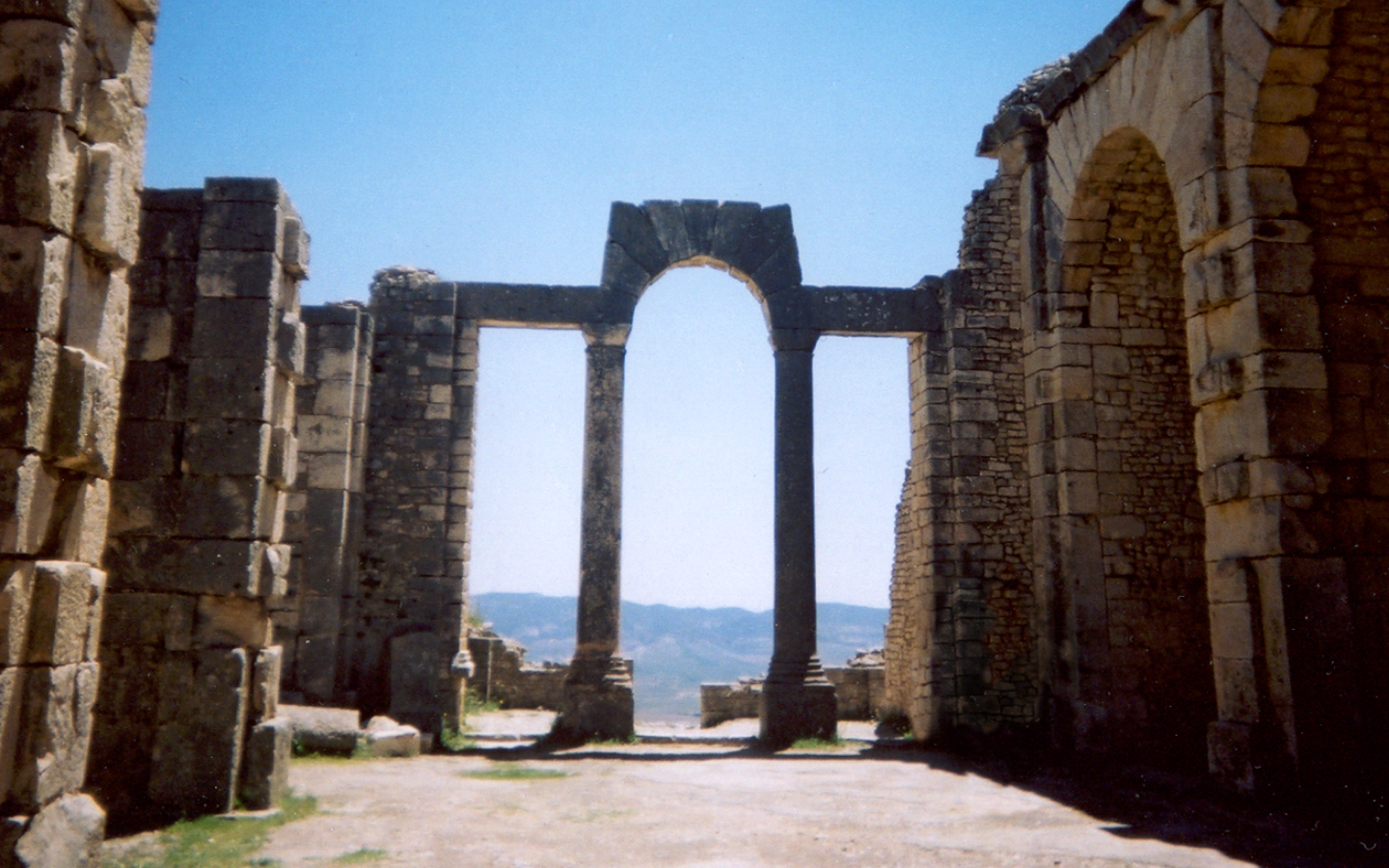 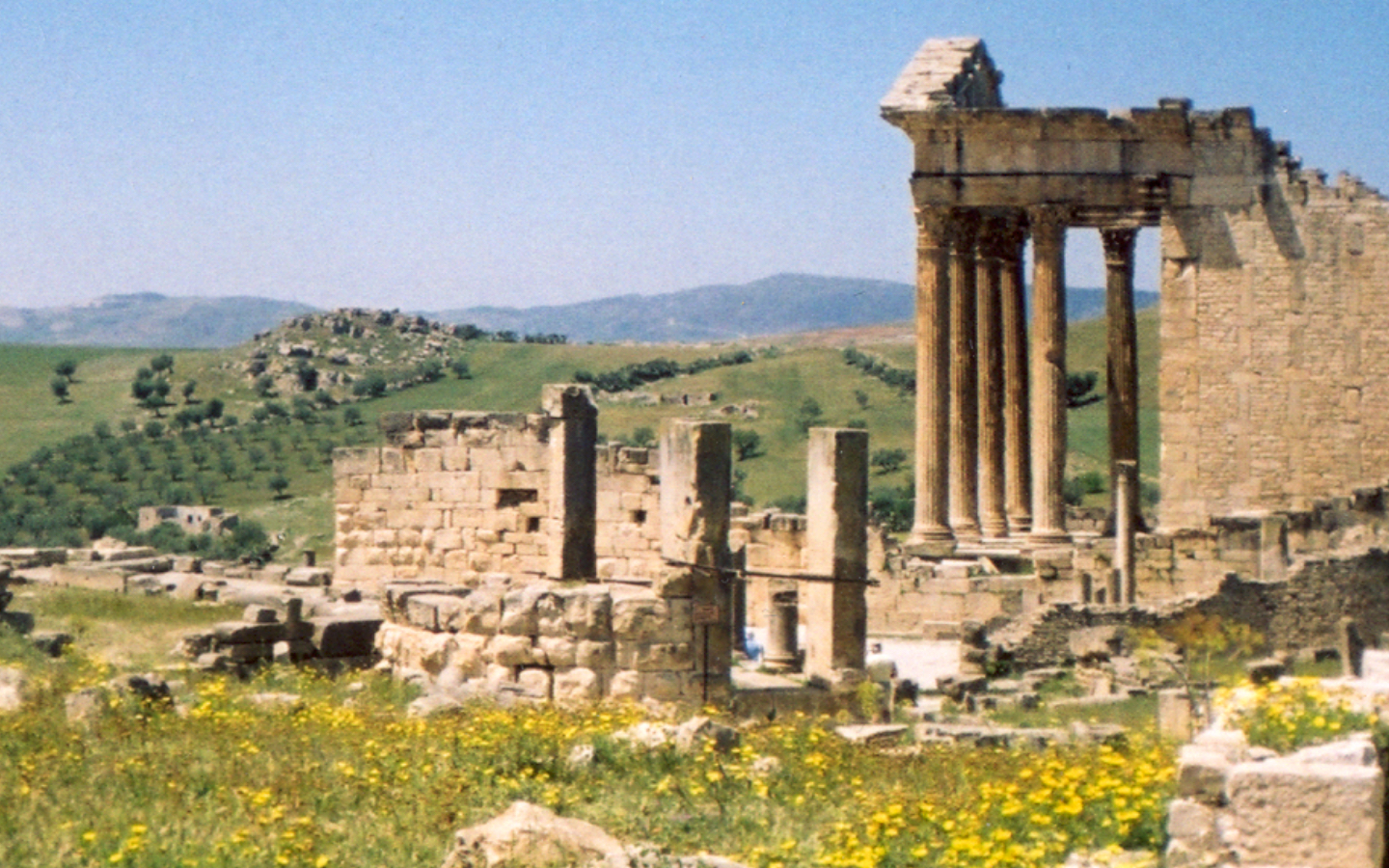 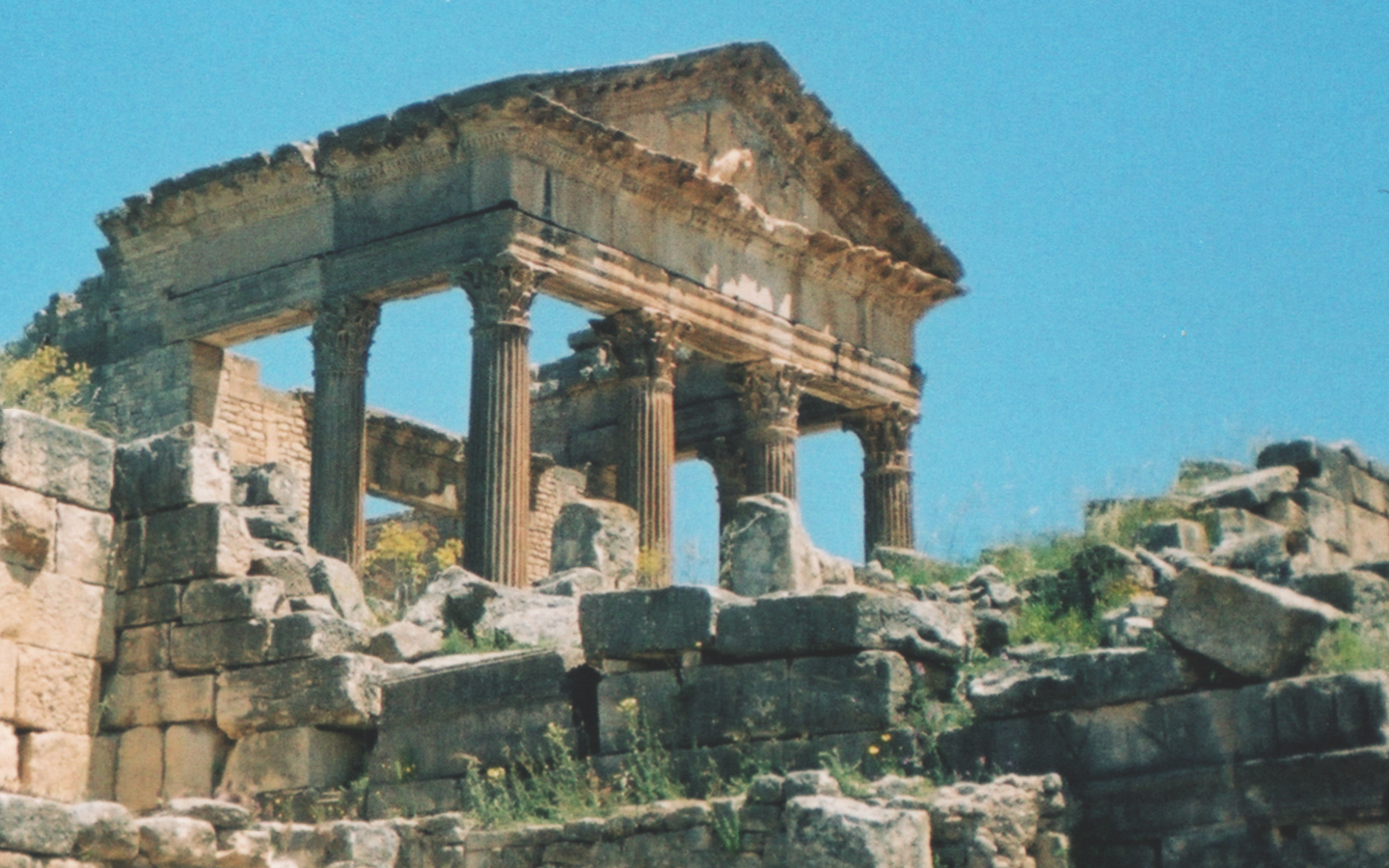 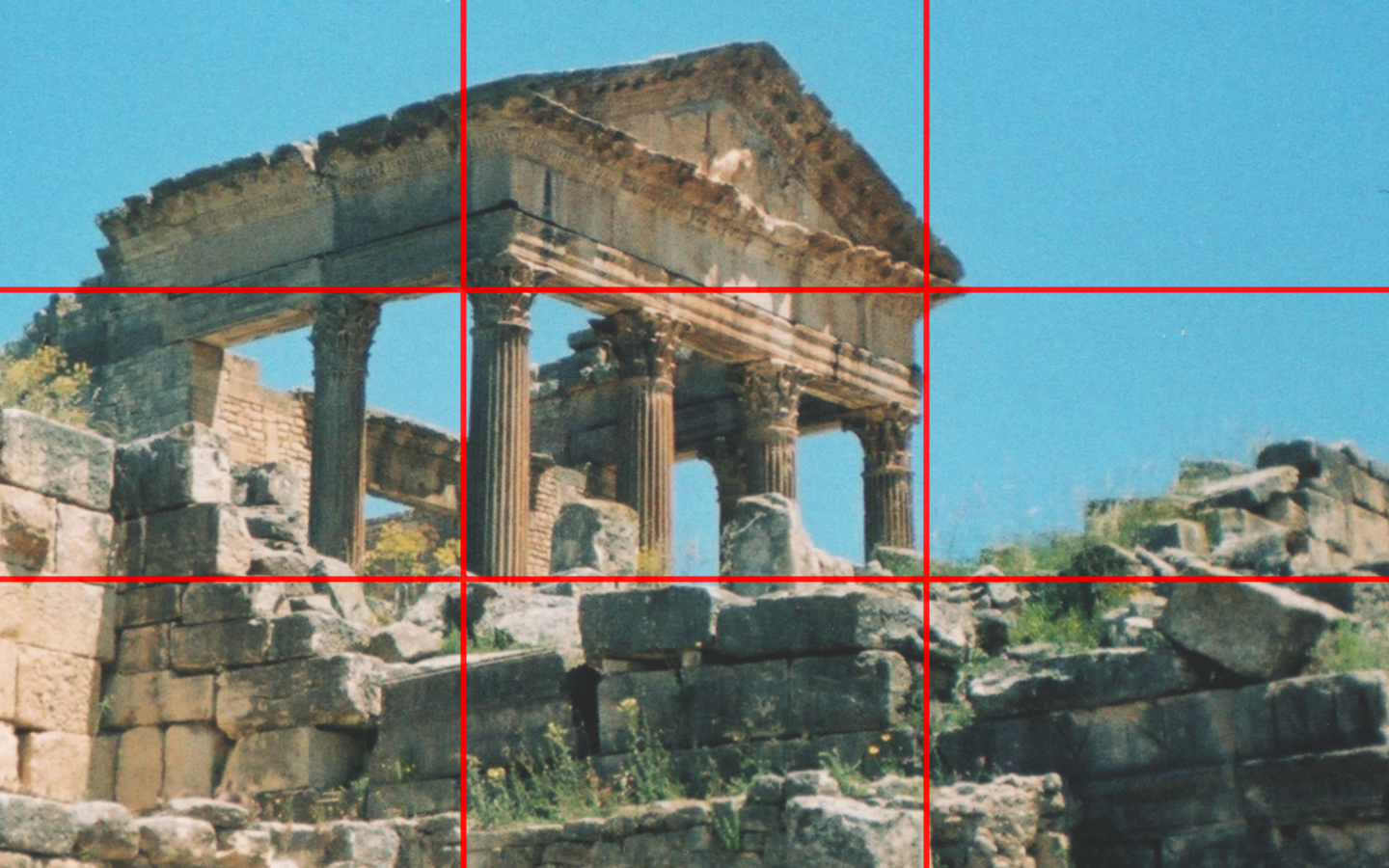 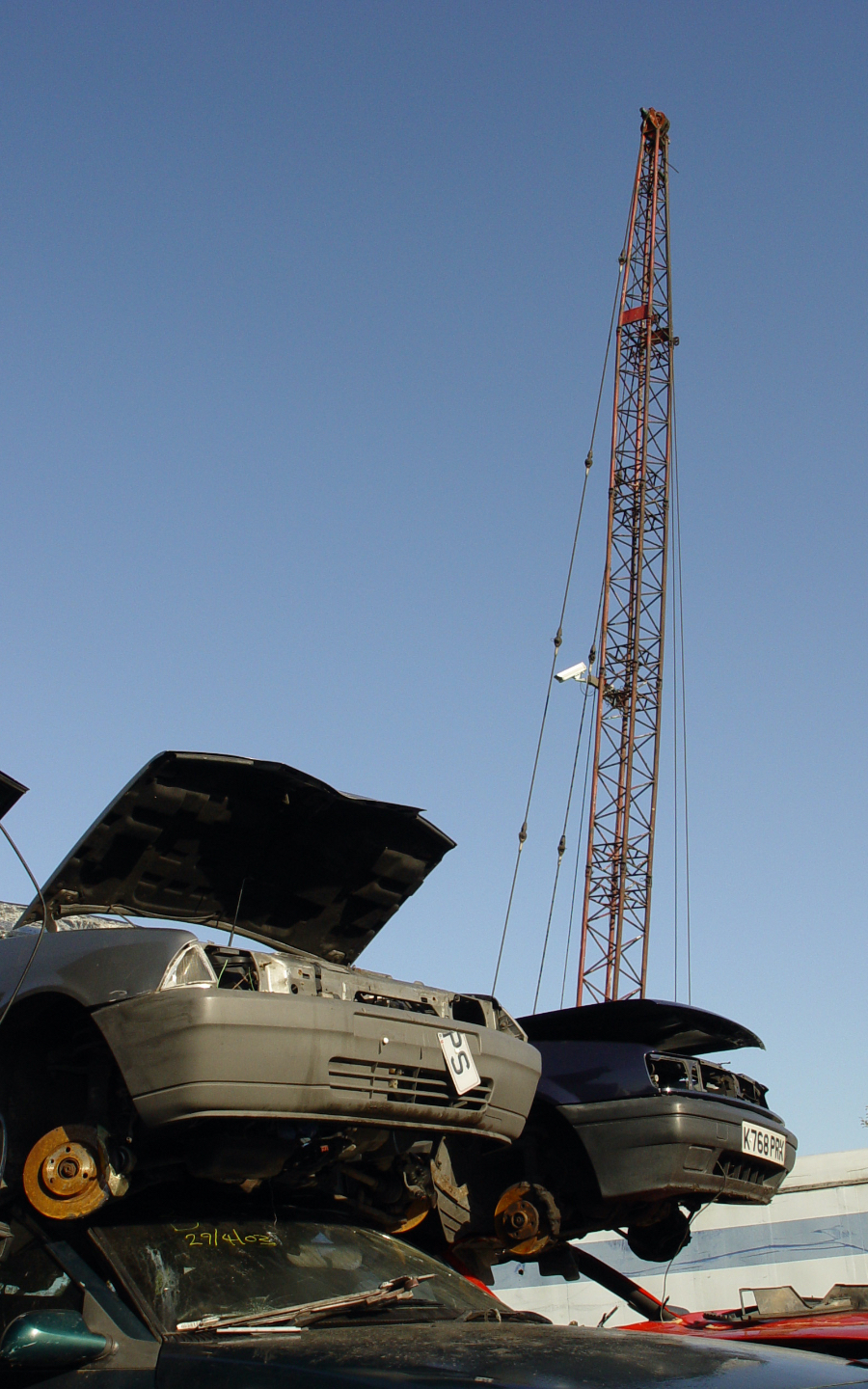 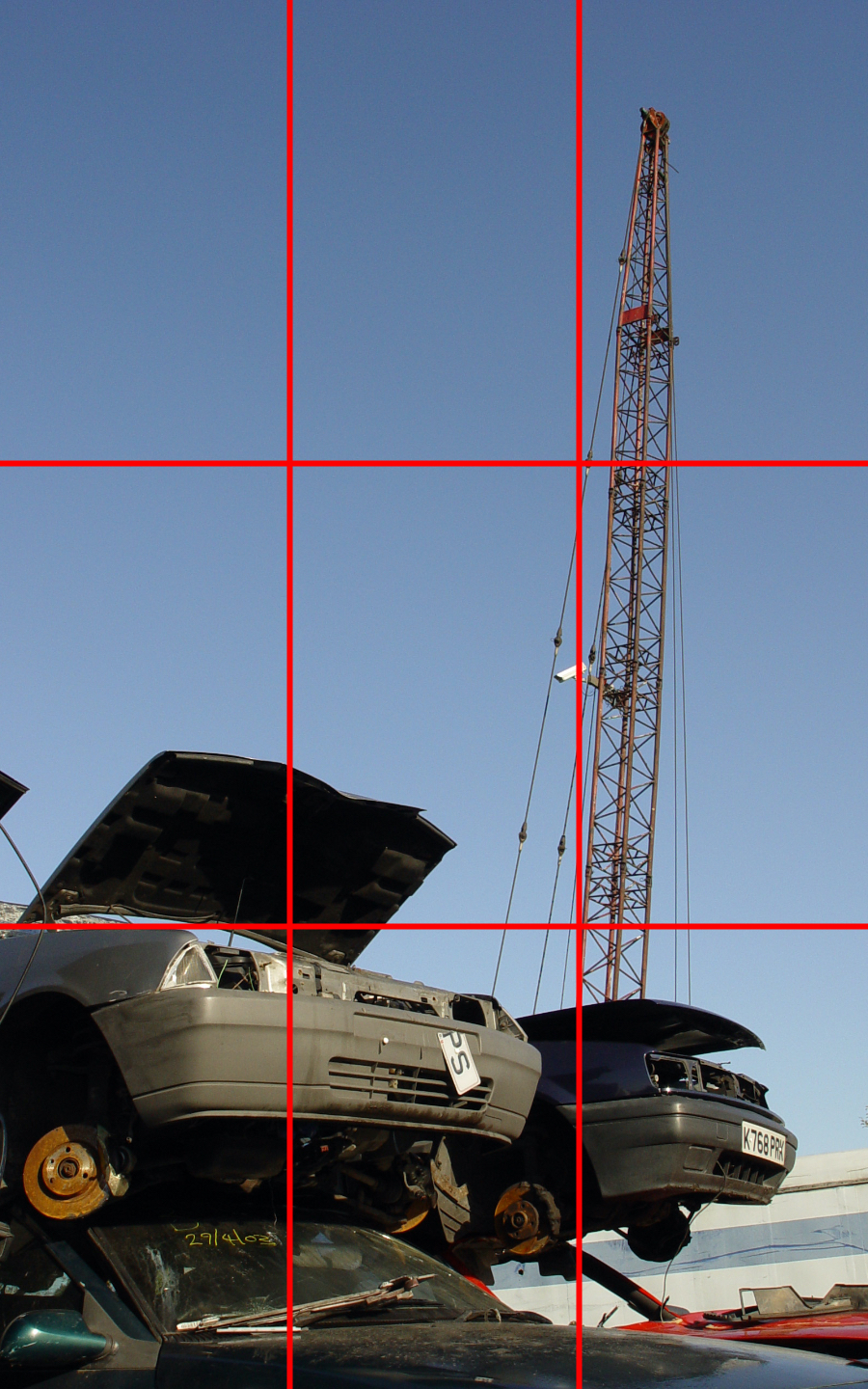 It is not necessary to try and match up lines in your scene to the exact grid. It is a simple guide that you can use mentally when looking through the view finder. (Some cameras now have a grid you can actually switch on).

The counter argument now rising against this is that overuse of this technique has made these obvious nine-grid images as mundane and conventional as the simple centred photography they replaced.

In order to fully understand the issues within this debate, it is necessary to look back to a far more ancient and mystical section with maths.

Phi is the ratio underpinning a division that has become known by various names: golden rectangle, golden ratio and golden mean among them.

If line A is divided into two sections, one larger than the other (B and C), the golden ratio is achieved where A/B = B/C.

The golden ratio features in nature and the dimensions of the human body, from DNA right up to the solar system and has been used by man throughout architecture, art and music. The Egyptians understood it when erecting the great Pyramids and the Ancient Greek buildings are full of these golden ratios.

Although this ratio has been rediscovered throughout time, one undisputed milestone in its history was the Fibonacci number series. In the 12th century Fibonacci produced a series of numbers by adding together pairs of numbers.

The ratio between each successive pair gets closer and closer to Phi as you progress through the series.

Once you start splitting a golden rectangle by the ratio, you can keep sub-splitting it down forever. The spiral this produces exactly matches the growth of the Nautilus shell in nature. Yes, it’s all getting a little freaky now.

While we’re here, we may as well throw the golden triangle into the mix. No, not that area of East Asia, although that has probably inspired many painters in its own way. The Golden triangle is an isosceles triangle where the relationship of the base to the hypotenuse is equal to Phi. In the splitting of a pentagram, golden triangles are produced. Michelangelo, Turner and Rembrandt all used golden ratios in their work. The architecture of Le Corbusier is also golden ratio heavy.

As for Leonardo D’Vinci, he was a golden ratio fanatic. His designs, paintings and studies of the human form abound with the golden ratio. Now we have to be careful about staring too long and hard at D’Vinci paintings, as amazing as they are.

Staring at D’Vinci paintings can induce all sorts of thoughts and concepts. Once you get lured in by the mystical rhythm of the Fibonacci number series, you will be on the slippery slope that is Phi. Sliding beyond help down the side of a golden triangle, you will fall into the endlessly spiralling golden rectangles. Before you know it, you’ll be hiding in the Conservatoire des Arts et Mëtiers after hours, waiting for the Knights Templar to swing the pendulum.

BACK TO THE FUTURE

Contemporary photography, recognising that it’s quite tricky to work out exactly where the golden ratio (currently calculated to 10 million or so decimal places) is across your tiny viewfinder, has taken this precise figure underpinning all life as we know it and rendered it as, “things look a bit nicer when you plonk the object about a third of the way across.”

Still, it’s much easier to work with.

Also, in order to employ pure Phi aesthetics, you have to start off with a ‘canvas’ that is a golden rectangle and those are a little too wide (or tall of you rotate it) for many shots, other than wide landscape shots and tall buildings.

One of the problem areas with people first discovering the rule of thirds is that there is a tendency to leave the grid on. Many photographs rigidly adhere to such an obvious nine-square grid that the content of the images almost takes second place. There is nothing wrong with this. I routinely place the subject a third of the way across as a matter of course and use it as a standard shot. But if all your photos look like a game of noughts and crosses and the entire grid is that obvious then maybe there is a problem with the subject matter or with other parts of the photo’s composition.

This doesn’t mean a clearly structured photo with a discernible grid is in any way bad or amateur. But a photo that does not display any clear grid is not necessarily in any way weaker aesthetically. Don’t look for the grid. Look for the well-composed shot. Certainly in your early attempts the grid is a useful safety net, but use it as a launch pad, not a constraining law. You will eventually find that you find the rule of thirds later in your photos where you never consciously sought it.

If you come across a well-structured shot that is balanced and framed perfectly, don’t panic if there is no obvious noughts and crosses board staring out at you. Equally, if you are struggling to compose a shot and it just isn’t quite working, look to implement the rule of thirds as a starting block to help you, even if you don’t end up taking that initial shot as your finalmage.

In the two-sided debate that rages on, always choose the third option… 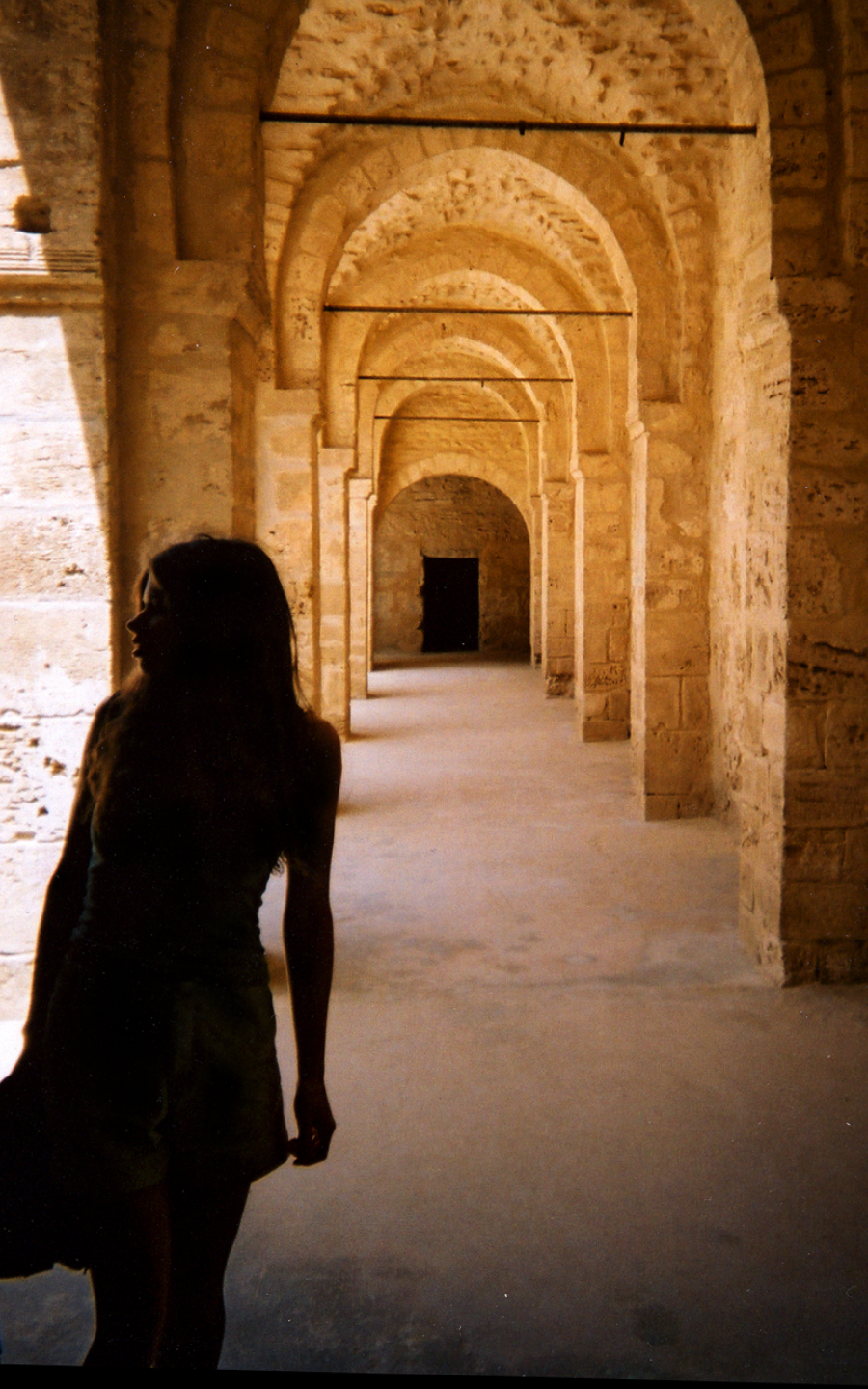 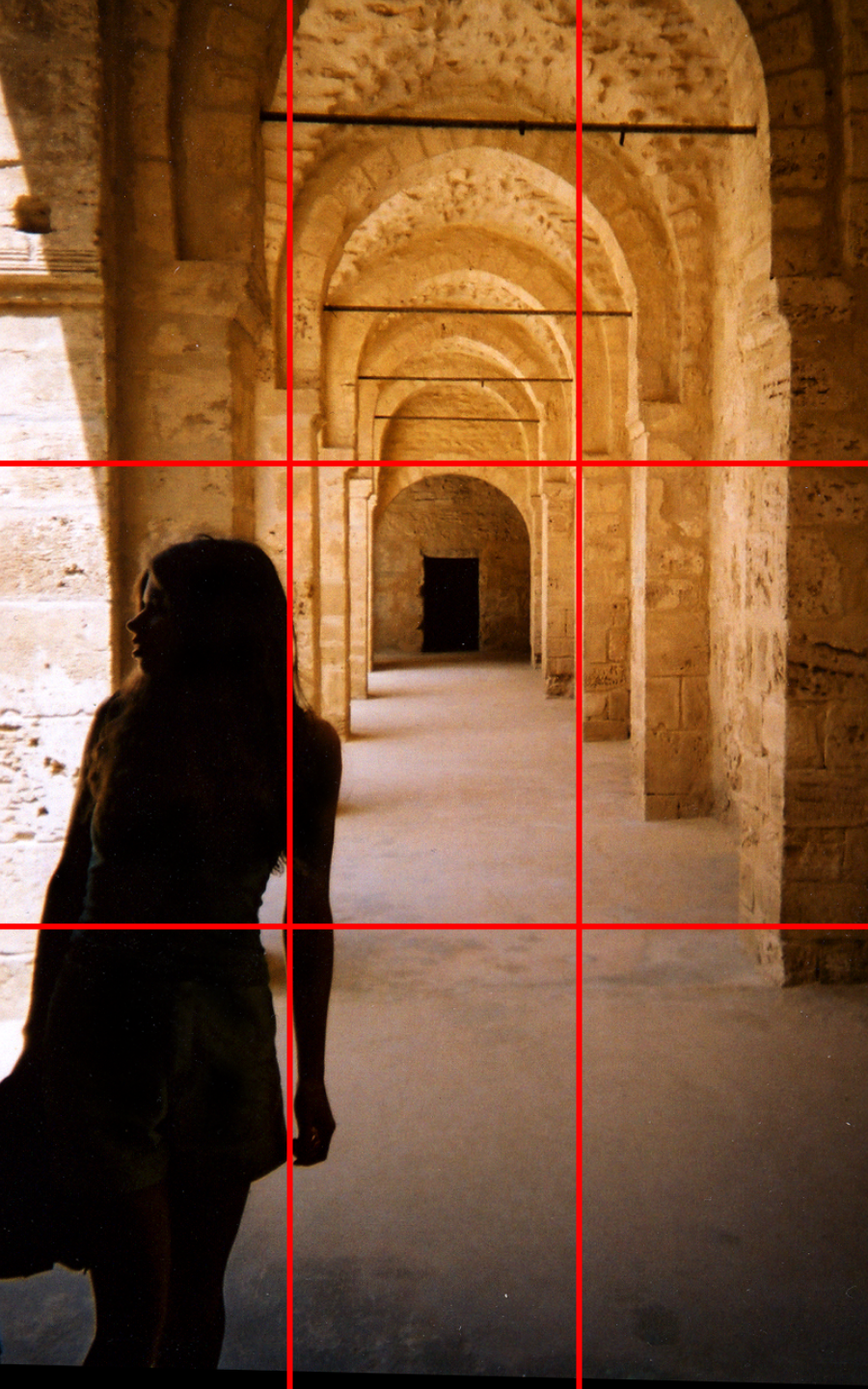 The endless archways here throw a useful grid onto the scene themselves. 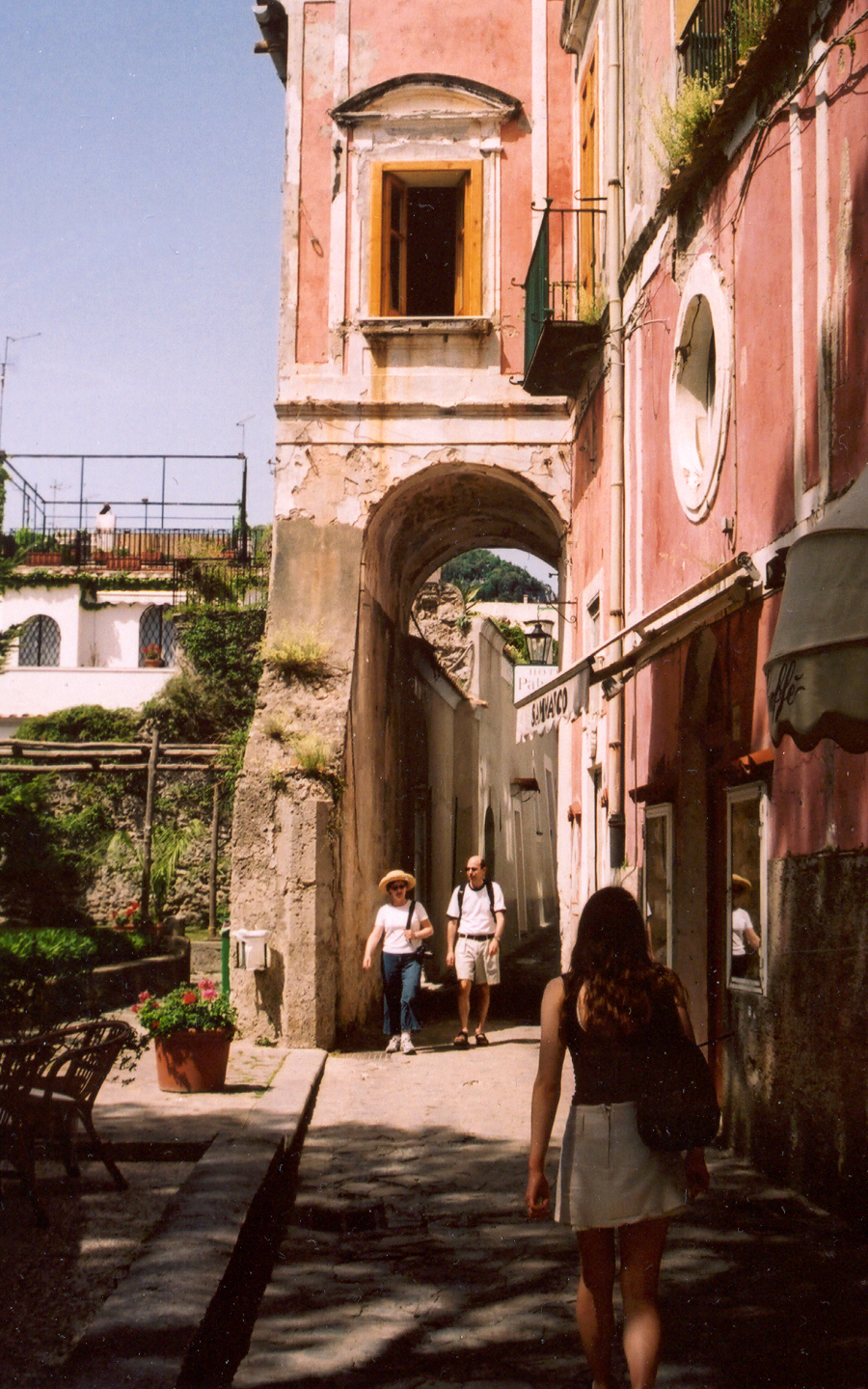 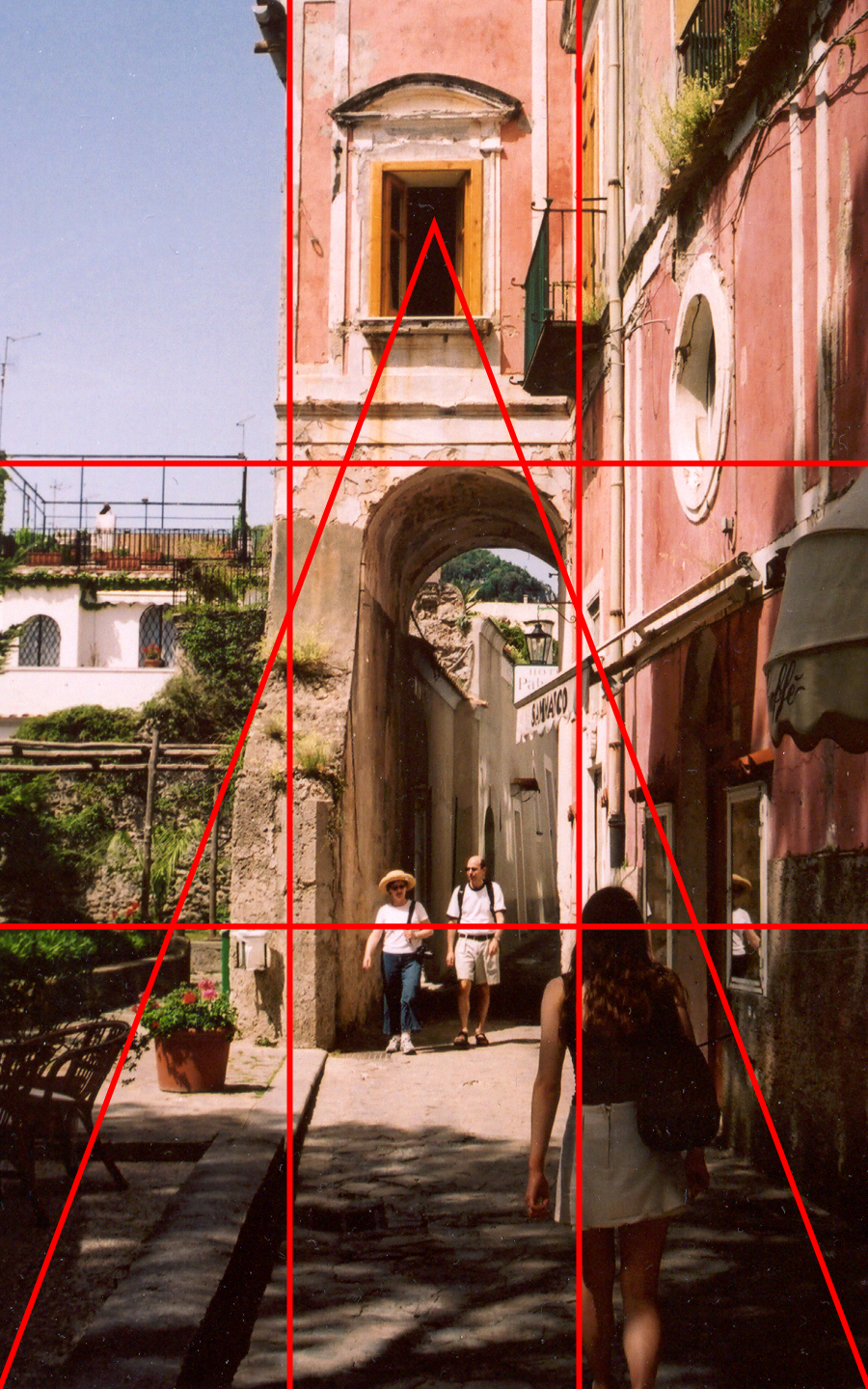 The thirds grid here is again easy to pick out, but there’s a golden triangle thrown in for free extending from the window to the dark area (bottom left) and to the female on the other side. 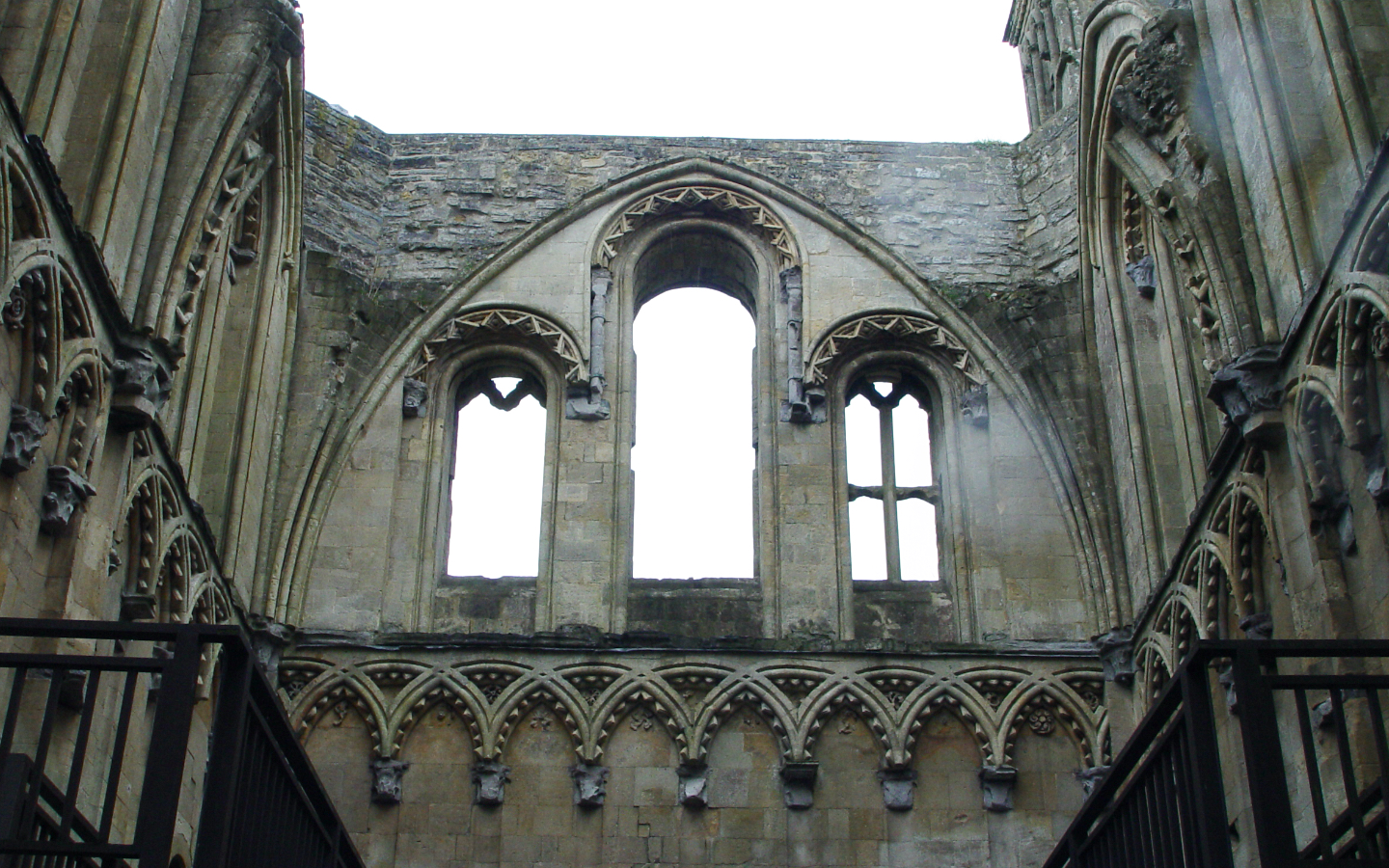 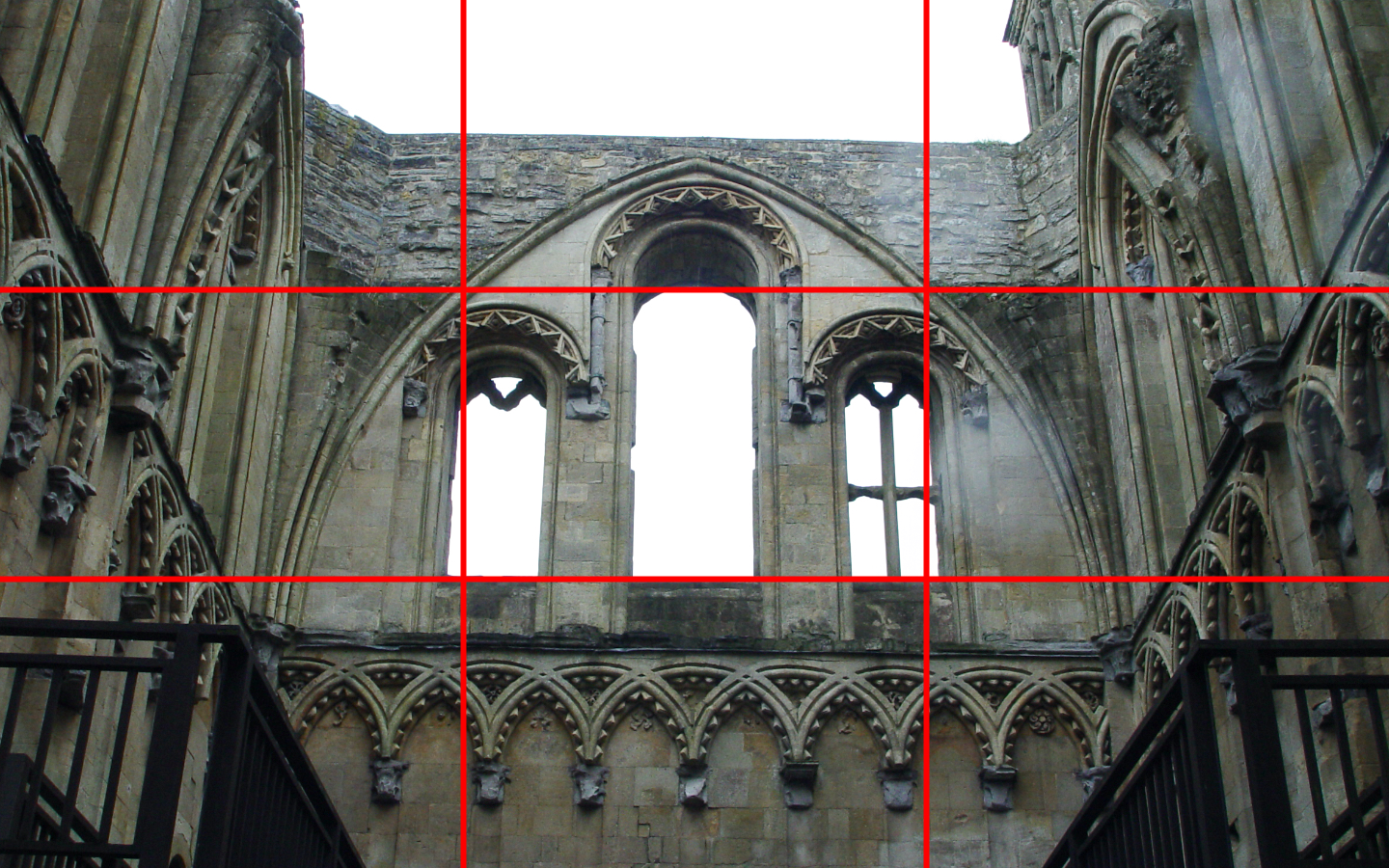 The obvious grid at work here falls along the vertical lines in the corners of the walls. The exact thirds grid actually falls much closer to the triptych of windows.

So far we have looked at grids in images that involve rigid architectural structures with obvious linear divides within the images themselves. 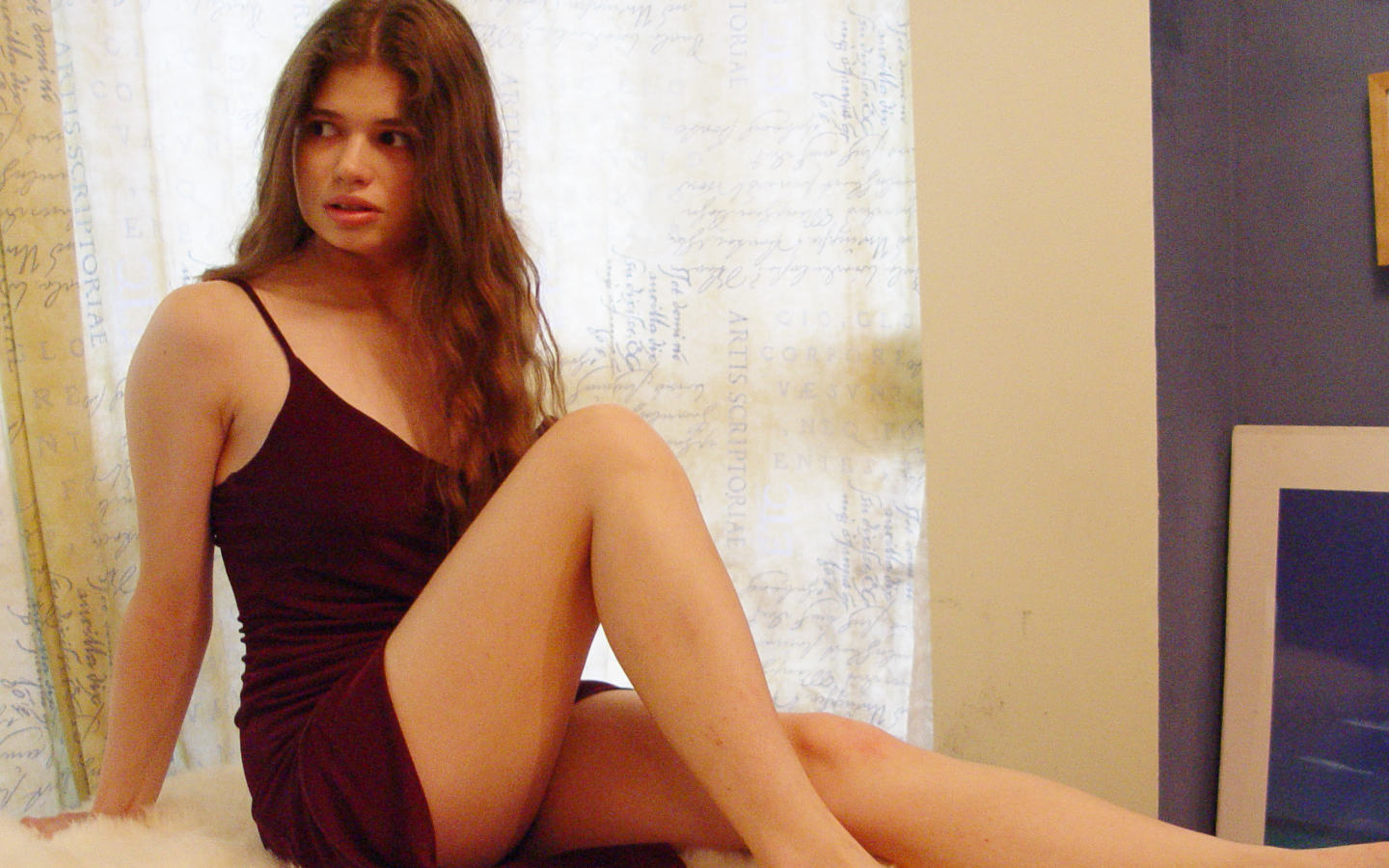 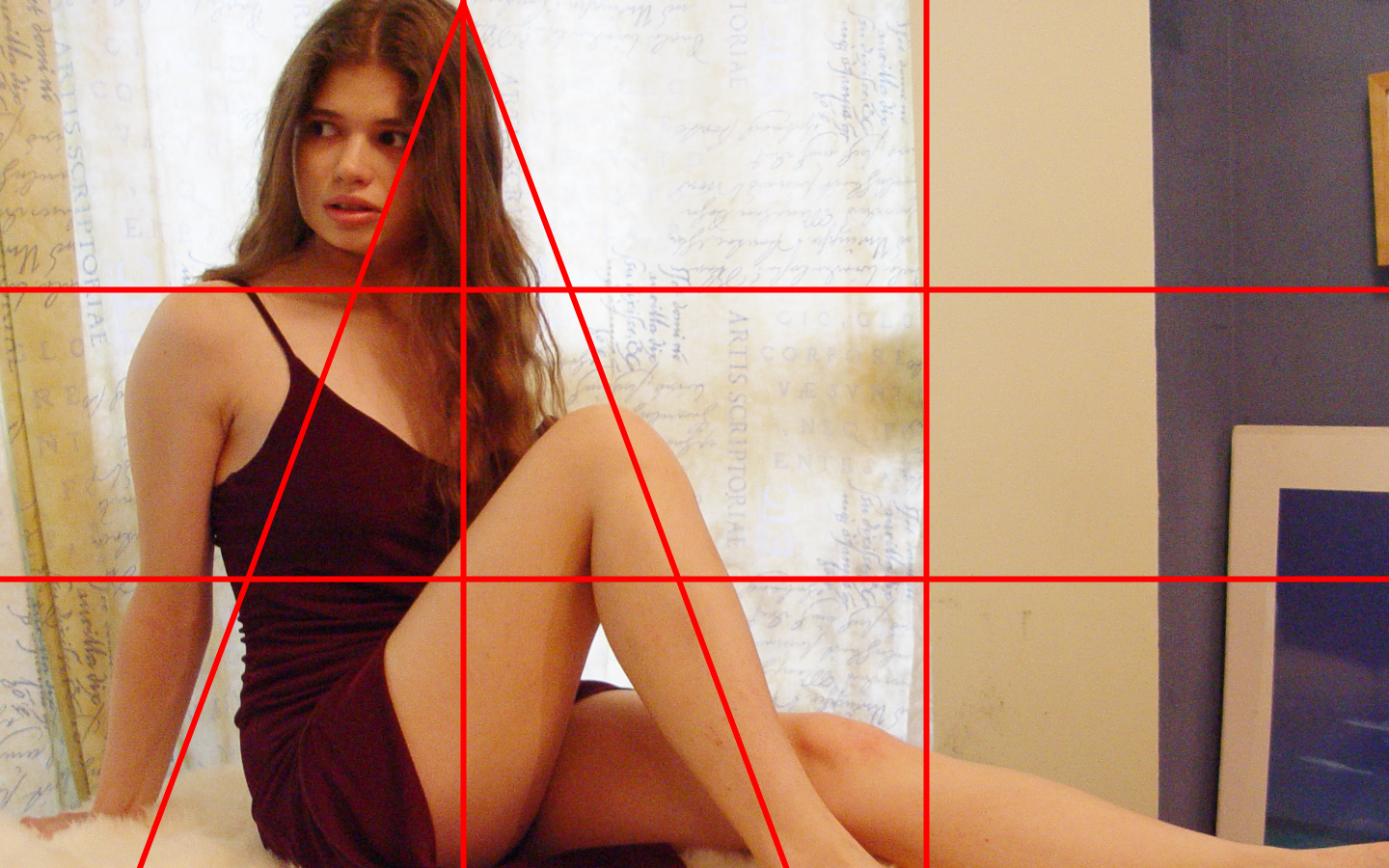 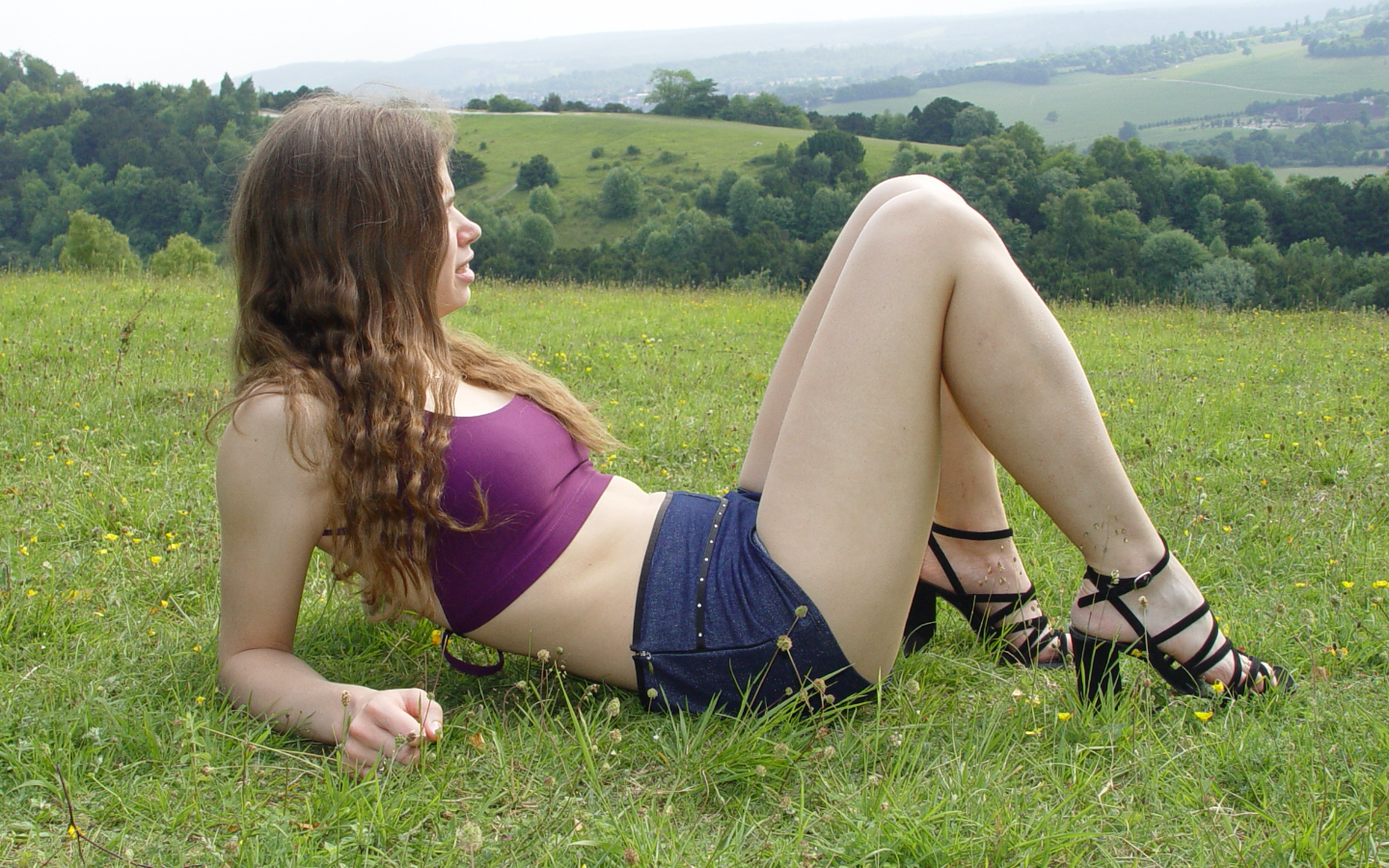 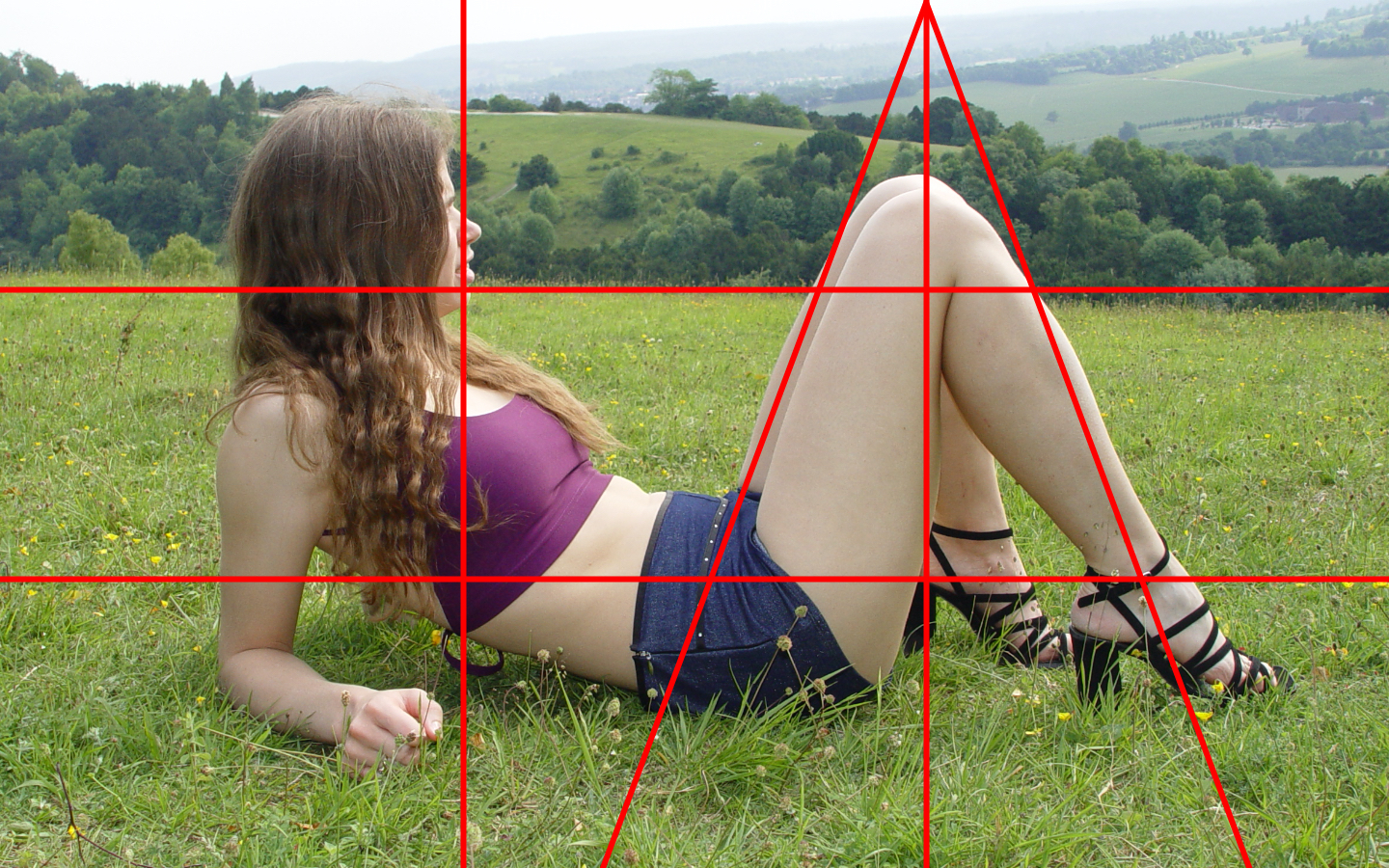 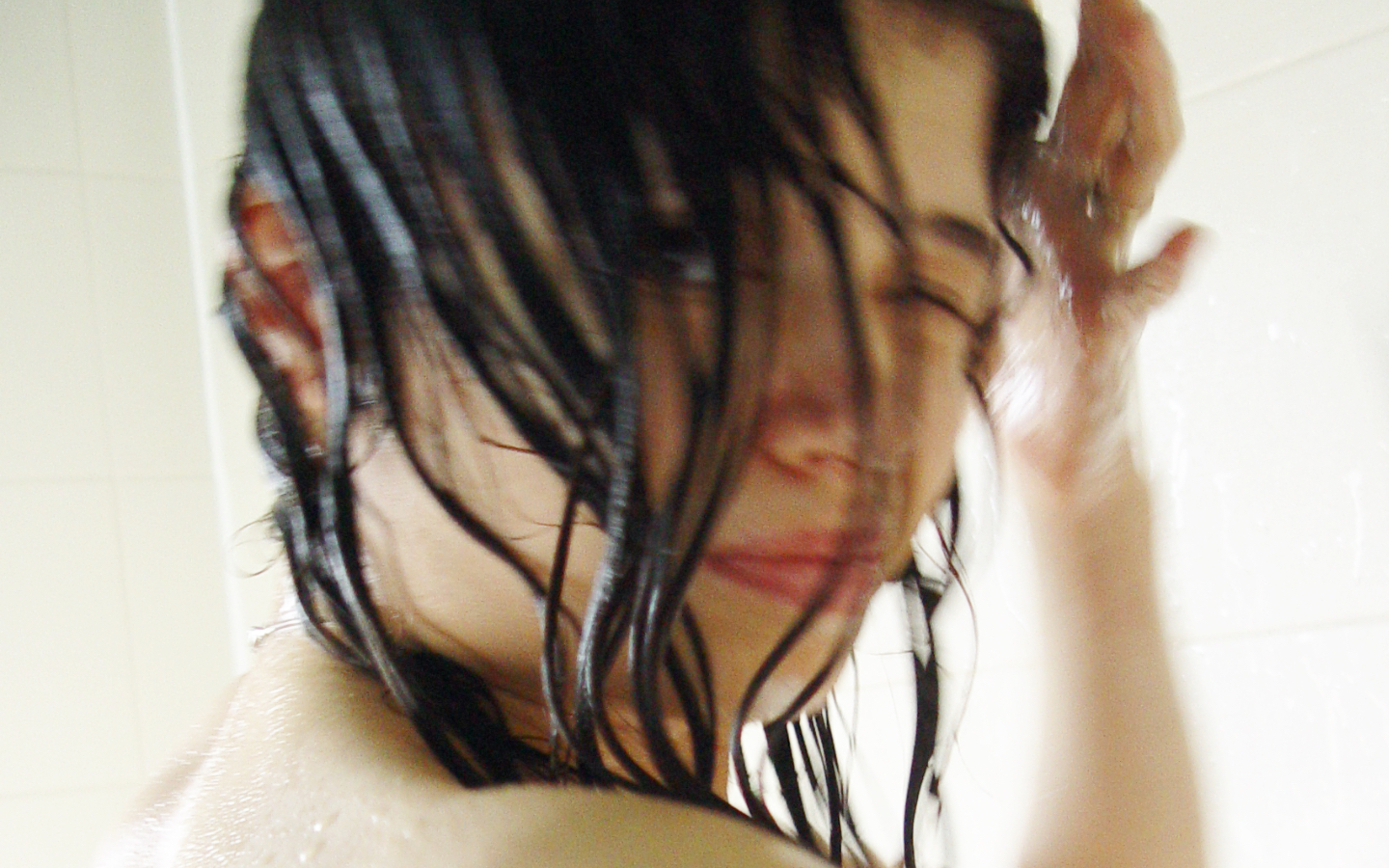 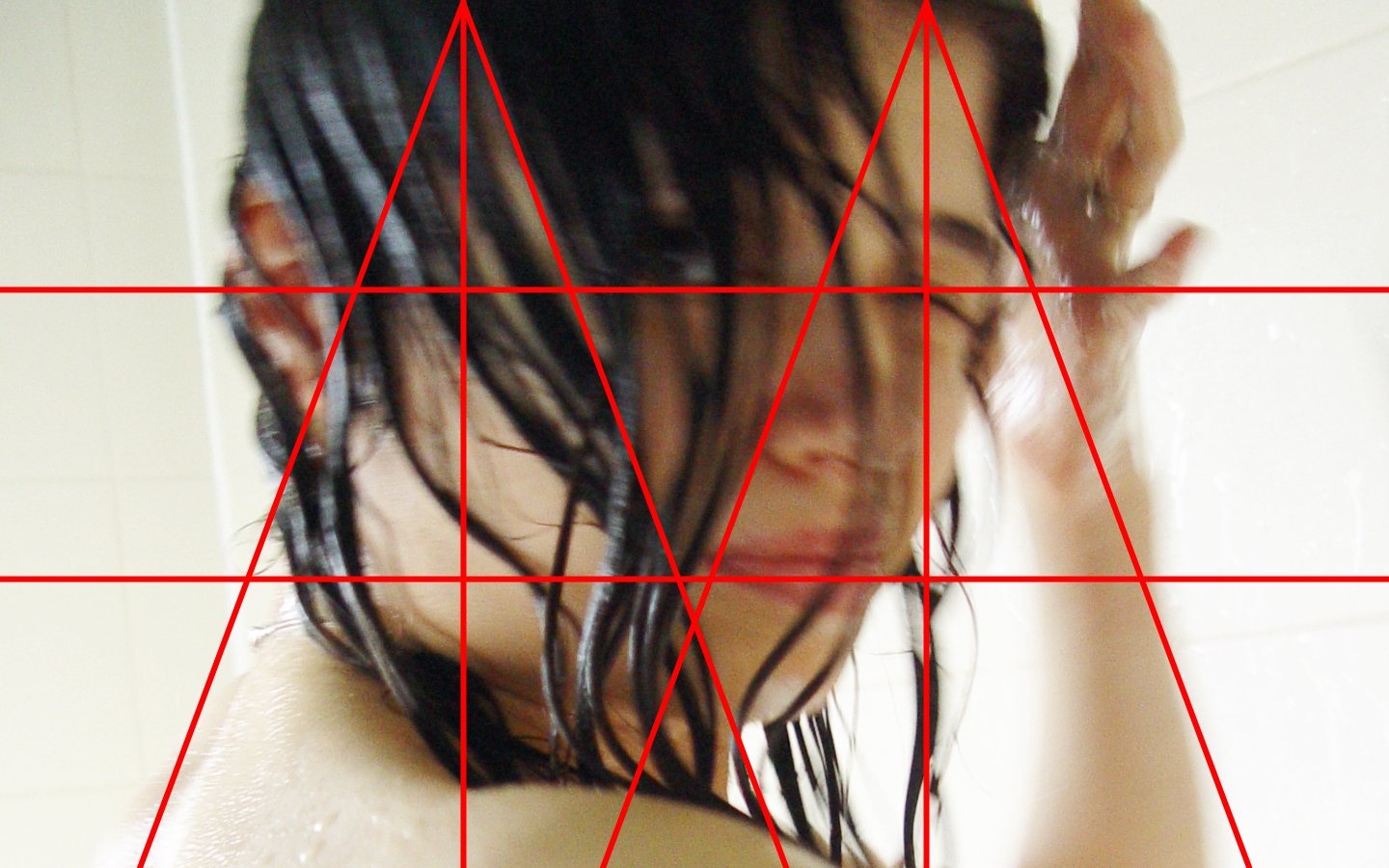 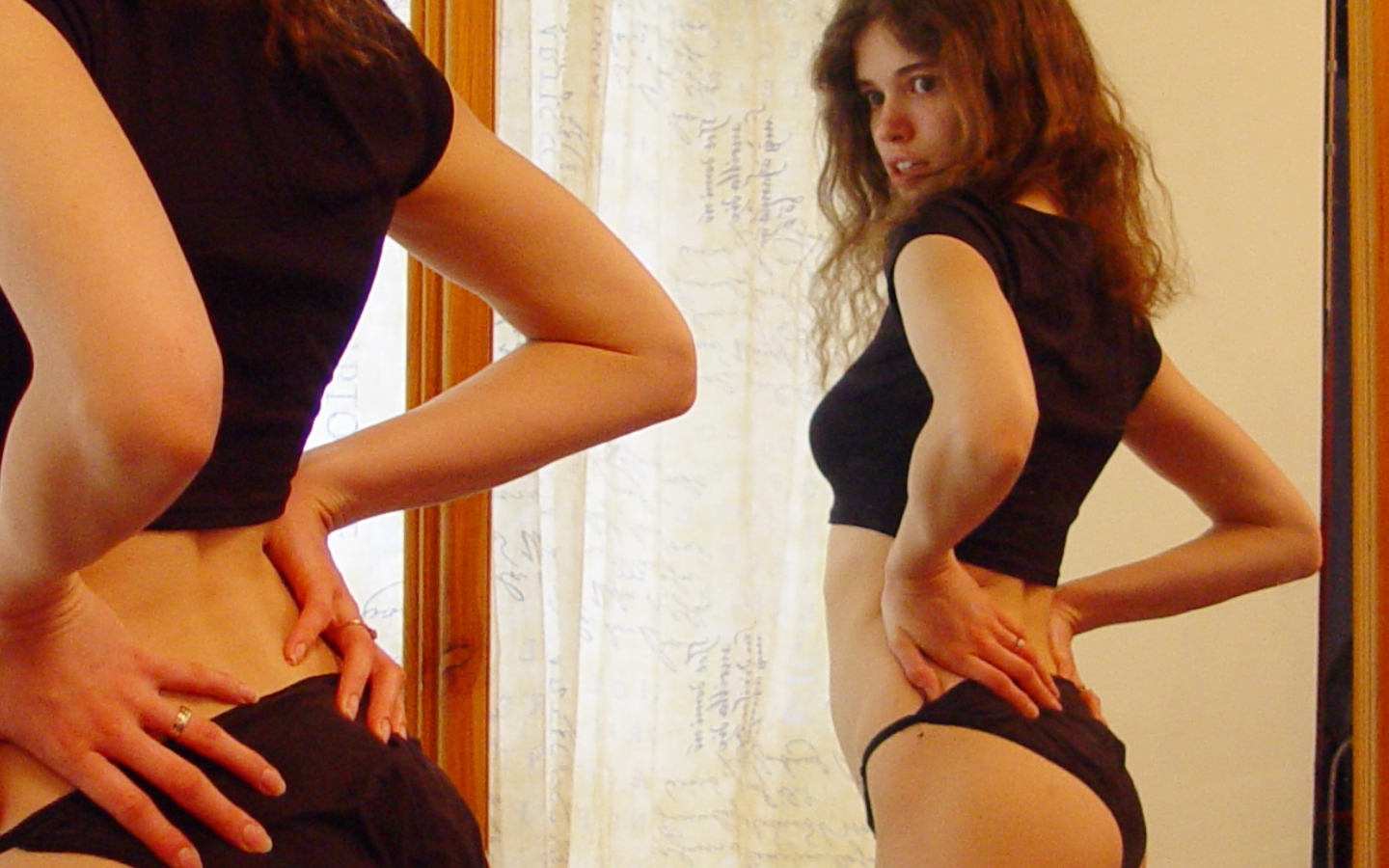 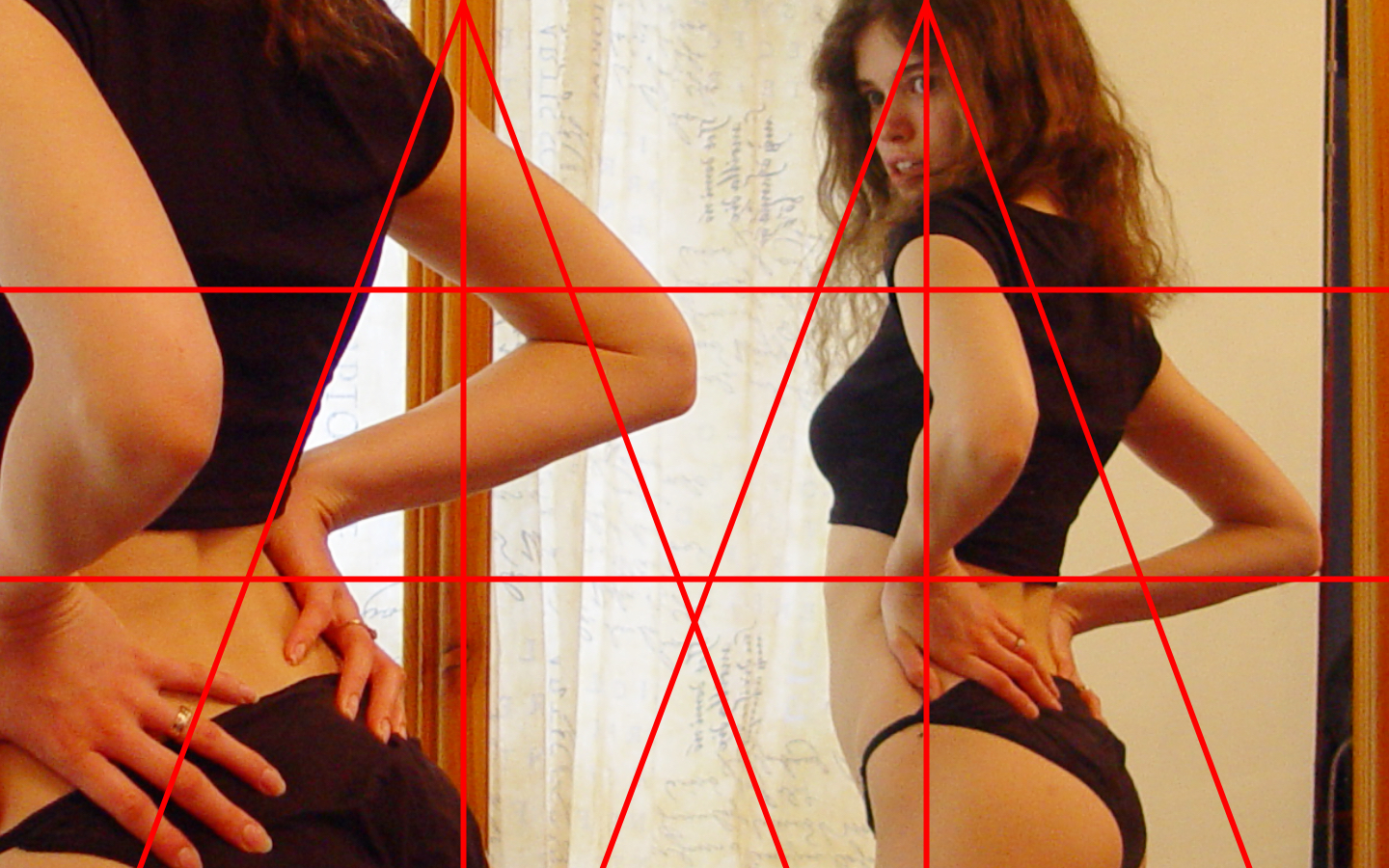